Our latest delivery was a very successful trip from Dubrovnik to Nice. We started on the 6th June and made good progress making Naples by the 12th and Nice by the 15th. The skipper arrived at Dubrovnik a couple of days in advance of the crew to ensure the boat was up to speed and made some very necessary repairs/changes to the boats set up. The clients were very appreciative of an experienced sailor making some slight yet vital changes to the boat in order to make it sea worthy for longer trips. The boat hadn’t really been set up over the last few years for long passages and had turned into a home sailing from port to port. Anyway, the crew turned up on the Friday lunchtime but it was decided we wouldn’t leave that afternoon as the exit from Dubrovnik marina to the open water was about 2k and the wind tended to filter into the marina making it very difficult to get out in the afternoon. Instead we spent the night in Dubrovnik old town, which was very nice, and set sail first thing in the morning. We had some great winds 20knots coming from the North meaning we could sail most of the way keeping a good average often above 6 knots.  The first few days are always interesting as you get to know the boat and how it sails.

Once we got around the heel of Italy the winds calmed slightly, we were on a nice starboard tack and with a little help from the engine we managed a nice 6 knots all the way going from east to west along the South Coast of Italy. This was a lovely long tack and enabled our crew to take in some fishing, looking for the costly Blue Fin Tuna… although we never found them or anything else for that matter.

We hit the Messina straits Monday night and although could appreciate the views it made for a safe journey through the straits avoiding fast moving ferry’s and tankers using the strait as a cut through. Once out the other side of Messina straits we headed straight up to Naples, or in fact the isle of Capri. The winds now died right down and were pretty much non-existent. This was quiet handy though as they were on the nose so would have made for a challenging sail up the West Coast of Italy. We continued to make good time although fuel was running low and with no real marinas close we had to head straight for Capri marina rather than risk the slightly longer journey to Naples. We cruised around the isle of Capri taking in its amazing views of the caves and numerous tourist boats and pulled into the harbour around the back side of the island. We topped up the diesel and without delaying headed to the port of Naples. 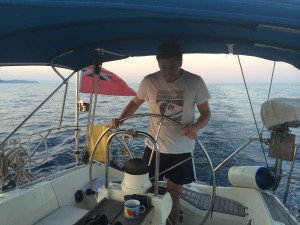 The yacht arrived at Naples some 4 hours later after visiting several marinas. We ended up going for the largest marina near to the town which was Sannazzara Marina. It was well positioned but catered more for super yacht and meaning the facilities were no existent as most boats had their own facilities. So it was a quick shower on board and off for another night taking in a traditional Naples Pizza then headed into the back roads for a few beers. Very good vibrant place with roads filled with bars and clubs all very welcoming.

The next day we headed off about midday and headed straight up to Nice. We encountered a dreadful lighting storm which was concerning but with the skills of the skipper and the crew we took the boat safely to Nice where we met the happy clients and handed the boat back to them. The boat was fully cleaned and handed back to them ready to be sailed safely anywhere.

Looking forward to our next delivery now, which looks to be a North Sea one so maybe not so much sun L