Home / Uncategorized / Storm in the Gulf of Lyon (Part 1)

Leaving the Port of Marseille  at a little after 3pm on a Monday the 19th August 2013, sun shinning and the wind reasonable calm Des the skipper, George and myself all prepared for a adventure across the Mediterranean on our yacht delivery..  We was delivering a Beneteau 42ft Centre Cabin from Marseille to Plymouth.  The marina at Marseille is very large and must have over a thousands boats moored at any one time.  There is an old marina and new, nothing obvious distinguishing them from each other but the mast just seemed to go on forever.  It takes about 5 minutes to poodle out of the Marina and out of the safety of the harbour walls, in doing so, the waves and wind immediately picks up but still with the sun baring down and the comfort of the close shores and other boats all is very relaxing. 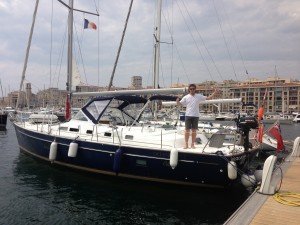 The weather forecast was advising of some nice winds from 10 am the next morning.  Therefore the plan was to get going so we could utilise the winds giving us a good start as the rest of the week was looking quite.  By 6 pm we were starting to get organised with clothes packed away and food all stored away.  The 3 of us started to familiarise ourselves with the boat and where things were.  Whilst doing so the winds were gradually picking up to 20 knots which we were all happy about and made for the 42ft yacht was reach a nice speed of 7 knots, which wasn’t excepted until the next day.  We had eaten at shore so the evening meal was some simple cheese rolls,

crisps and a hot cup of tea.  We agreed to a 4 on 8 off watch and by 8 pm the first watch kicked in.  By this time the wind had picked up to about 25 knots coming straight over the starboard bow, keeling us over on our side nicely.  As we had been up since 3 am that morning, catching flights etc, I was very tired and managed to get comfy in my luxurious aft cabin.  My Cabin had an en-suite, double bed and table which worked nicely as my laptop table allowing me to lay in bed and watch a film.  All was great and I slowly drifted off into a sleep, knowing the guys up deck had it all in control.